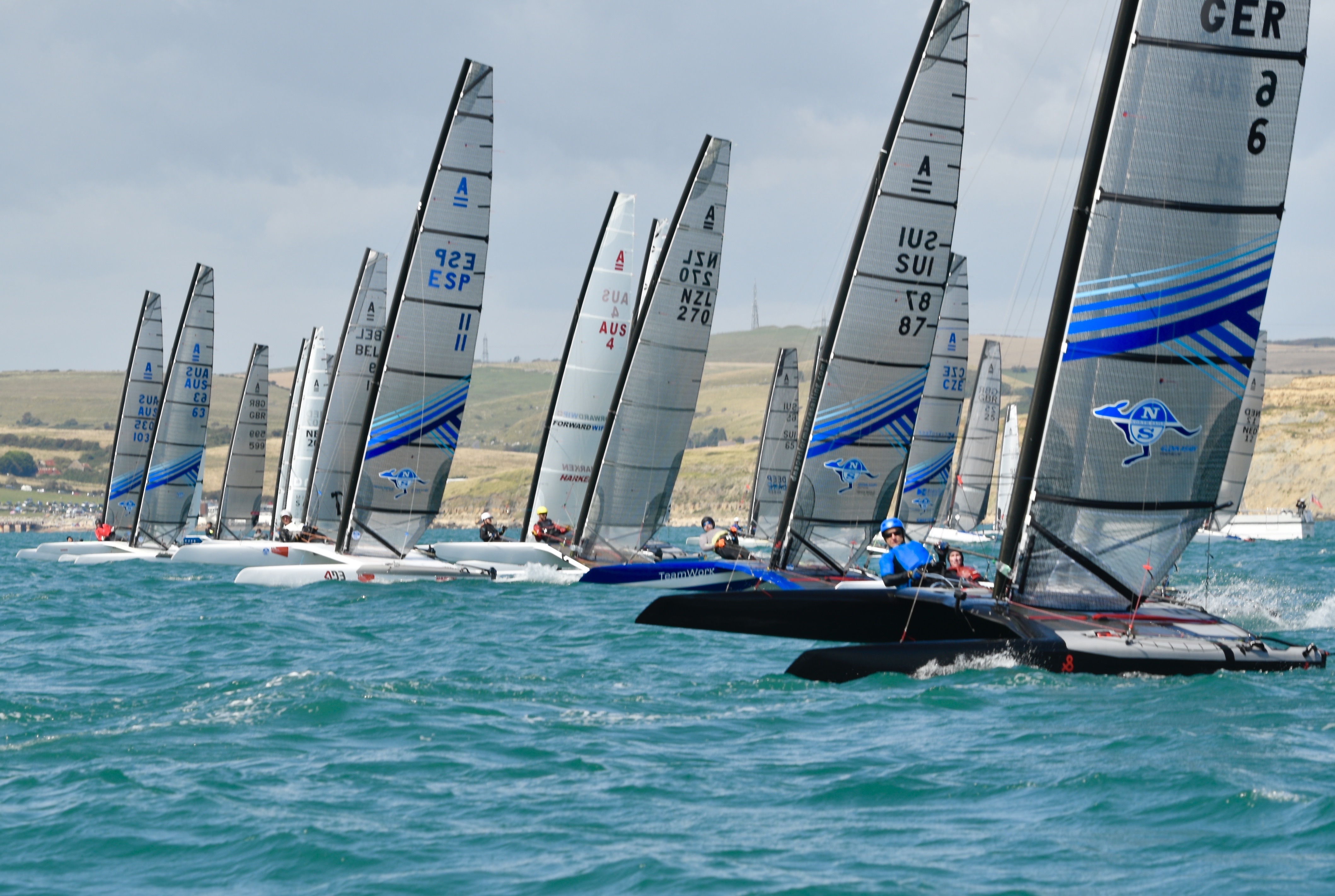 After two days wiped out due to high wind limits, the thoroughbred competitors entered in the GBR Nationals, or Britnats, as the Aussies call it, where starting to get rather twitchy.  But on day 3, Weymouth finally delivered, albeit with a few jellyfish the size of dustbins floating around, having blown in during the previous few days South Westerly storms.

The first race of the championship saw a steady 14-15knots Westerly, swinging left and right as the race progressed leaving the sailors trying to guess the best side of the course.

Race 2 was similar but with the wind picking up a bit to 16, gusting 20 knots. The fleet, slightly depleted by the jelly fish casualties, again set off.  One or two more boats fell over now as the wind got up.  The swinging looked less of a problem now, as the racers slowly switched towards survival mode.

The wind got up more again for race 3.  The fleet set off into 20-24knot gusts.  Survival mode for many, life affirming for others.  The tactics by now were just to stay on the top part of the boat and finish.  Watching an A Cat doing 27 knots boat speed, is something quite special.

But again as ever, the best winds were saved for the sail back home.  There was some great sailing, along with what was now an arcade game ‘Dodging the jellyfish’.  But a great way to get the first races of this regatta on the board. 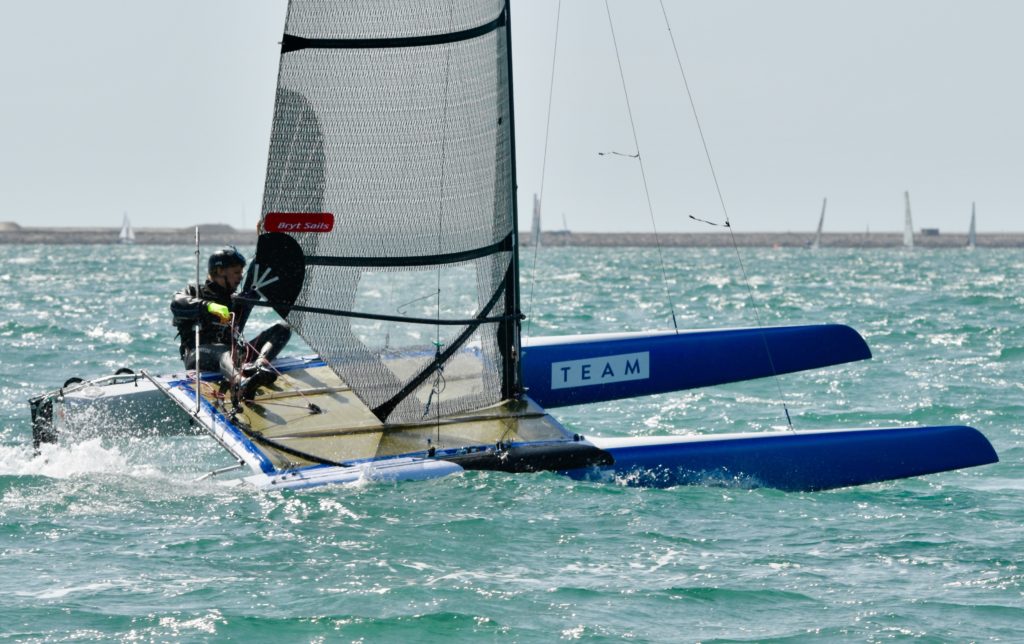 The second day of racing at the GBR Nationals brought much lighter conditions, 7-8 knots was the form. This also left wind holes in parts of the course, which together with wind shifts, created conditions more familiar to lake sailors.

The race format was the same as day one; three races, two starts, one course.  Only this time, the conditions were much more a Classic boat day.  The 3 lap Foiling and 2 lap Classic division format put the boot on the other foot with the Classics having to wait between the races for the foilers to finish for a change.

Racing inside Portland Harbour this time, partly to reduce jellyfish encounters and partly because the lower winds can require a shorter top mark distance.  The jellyfish were still at the party though, however fewer in number and they were hit less hard if you did get one.  They will hopefully be gone in a couple of days, and seem to sink down when it’s sunny.

In the Open division, the ‘early foilers’, so called because they can get on their foils in lighter winds earlier, were the winners here.  This may well be a skill needed next week because so far, the forecast is at the lighter end of the window.  Team Concise’s Junior GBR sailor Oscar Lindley-Smith was the top Brit in this strong field winning the title GBR Open National Champion. 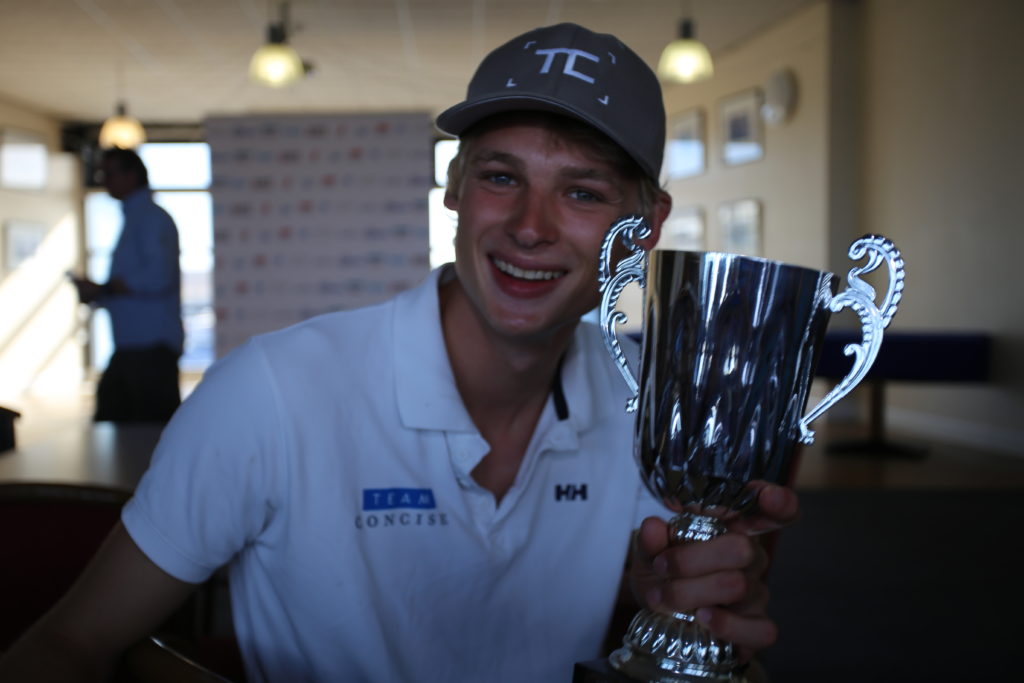 Race one of the 2019 Worlds starts 11am Sunday, with two races in the Open division followed by two in the Classics at 1PM on the same course.